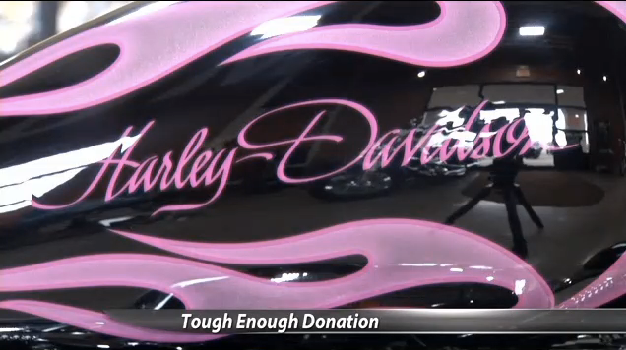 Do you want a pink Harley Davidson?  You could be the proud owner by being the highest bidder at The Minot Y Mens Rodeo on Tough Enough to Wear Pink night this Friday, October 11th.  Hats off to Connie Sundby and the entire Minot Y’s Men Rodeo board for their hard work that benefits their community cancer rehab exercise program.  Read or watch the entire story:

There are a lot of makes, models and styles of motorcycles. But one motorcycle is being driven an extra mile to help a good cause.

Connie Sundby is not just on the board of Tough Enough to Wear Pink, she has a personal connection with cancer.

“Ten years ago, I was diagnosed with breast cancer. And, it was quite a journey for me. And, I always feel that everything happens for reason. And, I guess the reason that it happened is that I could help Tough Enough to Wear Pink,” says Sundby.

“Going through cancer is not an easy journey. It zaps you mentally, physically. And, you are kind of drained of all of your energy. And, this program is a way to get back that energy,” says Sundby.

This custom Harley Davidson is one of the largest donations that Tough Enough to Wear Pink has ever received.

“This is a huge boost for us. We’re out selling shirts and caps for the last six, seven years trying to raise enough money to keep this program going. It’s hard. You got to sell a lot of T-shirts and a lot of hats. But when we receive a donation of this size to boost our program, it’s truly amazing,” says Sundby.

The donation of the $13,000 motorcycle will provide a big boost to the cancer rehab exercise program.

“Everybody’s in black and pink, and it’s kind of a badge of honor to wear that to know we’re working for a cause. That we want to help this organization that we want to help cancer survivors,” says Rick Teagle, Magic City Harley Davidson.

The custom Harley Davidson is being auctioned off at The Minot Y’s Men Rodeo on Tough Enough to Wear Pink night on Friday, October 11th.

Tickets for the Minot Y’s Men’s Rodeo can be purchased online at MinotYsMenRodeo.com.