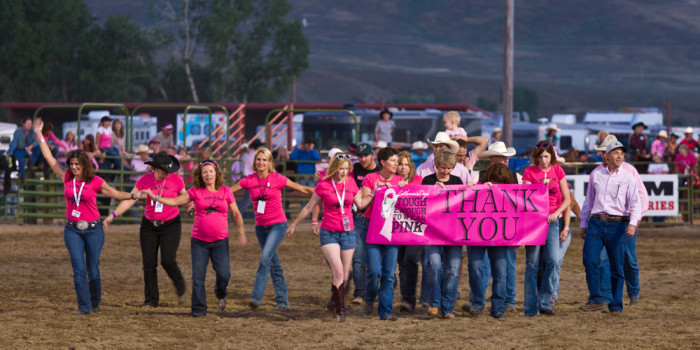 The Tough Enough To Wear Pink™ Western Campaign to raise money and awareness for breast cancer raised over $17 million dollars in 2013 through the hard work of regional rodeos and western events across the country.   The monies raised stayed local to benefit community breast cancer charities – which is the strength of the campaign’s success.

“2013 marked the ninth anniversary of Tough Enough to Wear Pink at the Wrangler NFR and the campaign continues to gain momentum.  Nobody could have imagined that together we would raise millions of dollars for the cause,” said Terry Wheatley. A breast cancer survivor herself, Wheatley is an entrepreneur, wife and mother to professional rodeo competitors.  She founded Tough Enough to Wear Pink in 2004 with Karl Stressman, former director of special events for Wrangler and now commissioner of the Professional Rodeo Cowboy Association (PCRA).

HATS OFF TO THE TOP TEN WESTERN EVENTS AND RODEOS FOR 2013 and their committee volunteers who made their campaigns a success!

Wrangler has been involved since the beginning and continues to be the title sponsor of Tough Enough to Wear Pink.   Lacey Wheatley, Terry Wheatley’s daughter-in-law, is the director of Tough Enough to Wear Pink and coordinates with rodeos and other non-rodeo organizations to create the pink-themed fundraisers.   Her daughter Katie supports the social media outreach for the campaign.

2014 will mark the 10th Anniversary of Tough Enough to Wear Pink.  Plans are underway to make this year even bigger and better than ever.  Want to get involved?  Contact Lacey Wheatley at lacey@toughenoughtowearpink.com.