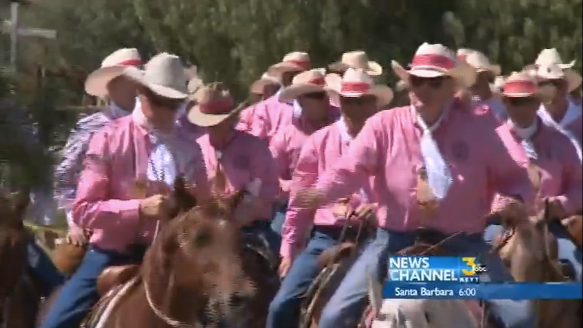 As part of our October tribute to rodeos and events that have supported Tough Enough to Wear Pink, our hats are off to the Rancheros Visitadores!  In May of this year, they flooded the streets of Solvang, California, on their annual ride, each one of them outfitted in pink to raise awareness and funds for breast cancer awareness and research.  Alys Martinez, KEYT – KCOY – KKFX Producer/Reporter, says it best:

“SANTA YNEZ VALLEY, Calif. – The historic ‘Rancheros Visitadores’ ride again!An estimated 850 men on horses and in carriages, and wearing pink, kicked off the 84th annual ride through the Santa Ynez Valley on Saturday.

The week-long event began with a parade in Solvang, then moved to the Mission Santa Ines, where the riders and their horses received a traditional blessing.

Founded in 1930, ‘Los Rancheros Visitadores’, or the ‘Visiting Ranchers’, is a group of men commemorating traditional rides that were made from ranch to ranch.  Some past riders have included President Ronald Reagan, Bob Hope and Walt Disney.

For the third year in a row, the ‘Rancheros Visitadores’ joined forces with Wrangler and the “Tough Enough to Wear Pink Foundation” to raise money and awareness for local breast cancer programs like the Cancer Center of Santa Barbara with Sansum Clinic.

Over the past two years, their members have contributed over $165,000 to the organization. The Rancheros say this year, their donation will top $100,000 dollars.

Following the parade and blessing, the group rides into the back country near Lake Cachuma for a week-long retreat.”