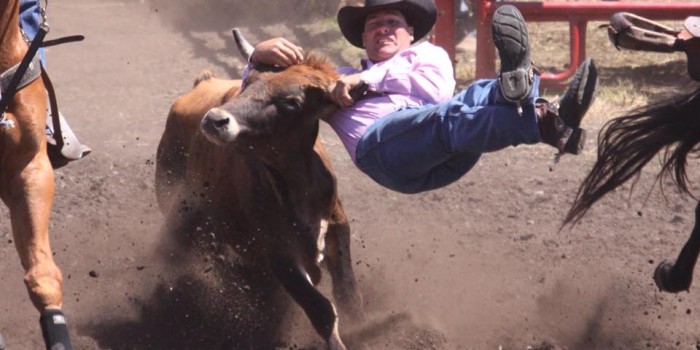 There are times when that which is obvious is not seen. That was true with America’s Most Natural Rodeo Bowl. More than 12,000 years have passed since the last glacier moved across the area which is now the Crystal Springs Ranch. The Coteau Hills (hills of the prairie) left by the glaciers became the range land of buffalo herds for many centuries. Starting in the 1900’s cattle replaced the buffalo and began grazing the hillside.

In the early 1940’s E.W. Weisel, wife Jo, and daughter Cleo could see the numerous springs, the native grass and their grazing cattle on the Crystal Springs Ranch. E.W. could also see the natural bowl created by its glacier 120 centuries earlier. He also imagined thousands of people occupying the hillside and enjoying rodeo performances in the bowl at the base of the hills. What he saw and what he imagined became a reality. The bowl at the base of the hills was leveled, many tons of rocks were moved and stacked on three hilltops, and snow fence was installed around the bowl for the early years of the rodeo. E.W.’s vision was clear and accurate. For 25 years E.W. and family produced the Crystal Springs Rodeo and had the responsibility and satisfaction of hosting thousands of rodeo contestants and performers, and many thousands of rodeo fans. They came, and continue to come, to America’s Most Natural Rodeo Bowl because of the vision and enthusiasm of E.W. in the early 1940’s.